“Thank you for your support !”

Just to let you know that the Morning star controllers have arrived here, works very well, the Ethernet link is really a good feature. 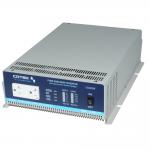 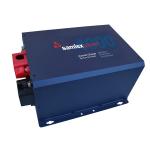 Off-Grid Inverters
Off-grid, or standalone, inverters convert DC power stored in batteries to AC power that can be used as needed. Read our FAQ on how an off grid inverter works.


In this case, the PV array and/or wind generator is used to charge the batteries via a charge controller (see our Charge Controllers section for more information) and only the power demanded by the loads is inverted to AC. Because these systems do not have access to the electrical grid, it is important to properly size the inverter and battery bank.

High quality standalone inverters are available in sizes from 100 watts, for powering notebook computers and fax machines from your car, to 60 kilowatts, for powering a commercial operation. The nameplate capacity of an inverter is measured by its maximum continuous output in watts. The inverter capacity limits the sum of all AC loads you can operate simultaneously. Most AC appliances list their consumption on a tag located near the power cord and/or in the owner’s manual. You will need to add up the consumption of all the appliances you may need to operate at once and that will represent your minimum inverter size. If your appliances include induction motors, like washers, dryers, dishwashers,furnace electronic controls, and large power tools, be sure to select an inverter with sufficient surge capability to accommodate the higher start-up loads. Read our FAQ on selecting the correct size off grid inverter

In the past, most battery-based inverters supplied only 120 VAC 60 Hz single-phase outputs. Now, many of the more popular residential-sized inverters, like the OutBack Radian, Schneider XW, and Magnum MS-PAE inverters, deliver 120/240 VAC power from one inverter. These inverters can also be wired in parallel for greater power output. Pairs of some 120 VAC output inverters like the OutBack FX series and Sunny Island inverters can also be wired in series for 120/240 VAC split-phase, or 120/208 VAC three-phase output.

Inverters that supply 50 Hz power are also available for most product lines. Please contact us with any special requirements that you have.

Off Grid inverters are available with two basic power output waveforms: pure sine wave, and modified sine wave (the proper term is actually modified square wave, but since modified sine wave is much more commonly used, we use that term in this website). Apollo Solar, Exeltech, Xantrex XW Series, SMA Sunny Island, Magnum MS and OutBack FX inverters are pure sine wave off-grid inverters.
Sine wave inverters have a higher cost, but they can operate almost anything that can be operated on utility power. Exeltech sine wave inverters are an excellent choice for power systems running audio or telecommunications equipment and other electronics that are waveform-sensitive. We now carry Samlex sine wave PST inverters for a lower cost, a small system sine wave alternative.
Xantrex TR series, Magnum RD, and Samlex PSE inverters have modified sine wave output with harmonic distortion of around 40%. They are an economical choice in power systems where waveform is not critical. Their high surge capacity allows them to start large motors while their high efficiency makes them economical with power when running small loads like a stereo or a small light. They can power most lighting, televisions, appliances and computers very well. Unfortunately, this type of inverter may destroy some rechargeable tools and flashlights, and laser printers and copiers. They may not allow many laser printers, copiers, light dimmers and some variable speed tools to operate.
Wiring Considerations

Battery-based inverters require high current from a battery bank to operate large loads. A 2 kW inverter will draw nearly 200 A from a 12 VDC battery bank. Large cables and good connections are required for safe operation. Use caution when plugging a small inverter into a lighter outlet in a vehicle, as these outlets are usually not robust enough to handle high current for long periods of time. All battery-based inverters require proper fusing between the battery and the inverter.