I have worked with The Solar Store on many occasions and have always been very happy with there professionalism, Knowledge and the quickness in which I get the products I needs. Everything from small bearing to complete units. Thanks Guys. 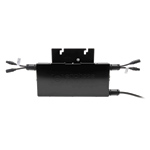 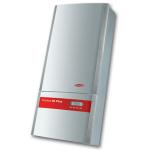 Grid-Tie Inverters
Grid-tie, or utility intertie inverters convert DC power from PV modules into AC power to be fed into the utility grid. There are two major types of grid-tie inverters; string inverters and Micro-inverters.

The SMA Sunny Boy, Fronius and Xantrex GT-3 inverters are string inverters. The name “string” comes from the way the PV modules are wired together, in series to achieve a higher voltage. These inverters are designed to run at voltages up to 600 VDC. String wiring is faster to install, more efficient and allows the use of smaller gauge wire. DC voltage this high can be very dangerous and life-threatening, so string inverters should be installed and serviced by qualified electricians.

Micro Inverters such as from Enphase are bolted to the PV mounting structure beneath the solart modules. They convert the DC output of each module in a grid tied system to AC replacing the dangerously high DC voltages with comparatively lower AC potentials and a greatly simplified system design. One of biggest advantages to using micro-inverters is that instead of sizing (and therefore limiting) your inverter to a specific number and overall wattage of solar panels, with Enphase, you use one micro-inverter per panel.  To increase the size of your solar electric system, you can simply add single (or any number of) panels of different wattages and even different manufacturers.  You simply add one micro-inverter per panel. With the Enphase Micro-Inverter system, you do not have to invest in another larger inverter when you are ready to expand;  just add one micro-inverter per panel.

Module optimizers, such as those from Tigo and SolarEdge, mount behind each module like a micro inverter and provide individual module MPPT tracking and monitoring but have a DC output that is connected to a string inverter. these devices simplify system design and increase safety at a cost slightly below that of a micro-inverter.A grid-tie PV system uses the utility company, in effect, as its storage battery. When the sun is shining, your electricity comes from the PV array, via the inverter. If the PV array is generating more power than you are using, the excess is sold to the power utility company through your electric meter, by making the meter run backward. When you need more power than the PV array can supply, the utility makes up the difference. This type of system makes the most sense in most cases where you have utility power, because there are no batteries to maintain or replace. Unfortunately, if the utility power goes down, this type of inverter will go off, too, regardless of whether or not the sun is shining.