The total electrical power output (wattage) of a photovoltaic module

Photovoltaic modules may produce current over a wide range of

voltages. This is unlike voltage sources such as batteries, which produce

current at a relatively constant voltage.

The output characteristics of any given module are characterized by

a performance curve, called an I-V curve, that shows the relationship

between current and voltage output. The chart shows a typical I-V

curve. Voltage (V) is plotted along the horizontal axis. The current is

plotted along the vertical axis. Most I-V curves are given for the standard

be noted that STC represent the optimal conditions as a consistent

means for measuring — rarely are these conditions recreated in outside

This point, labeled Vmp and Imp, is the operating point at which the

indicated for that curve. In other words, the Vmp and Imp of the module

and 1,000 watts per square meter. The voltage at the maximum power

downward to read a value on the horizontal voltage scale. The example

to read a value on the vertical current scale (Imp). The example above

displays a current of approximately 2.5 amps at the maximum power.

The wattage at the maximum power point is determined by multiplying

the chart, the maximum wattage at STC would be approximately 43

watts. This power is represented by the rectangle under the curve.

The power output decreases as the voltage drops. Current and power

This point, labeled Voc, is the maximum potential voltage achieved

example at left displays an open circuit voltage of approximately 21

can be measured in the field in several common circumstances. When

buying a module, it is recommended to test the voltage to see if it

matches the manufacturers specifications. When testing voltage with

a digital multi-meter from the positive to the negative terminal, an

open circuit is created by the meter which allows Voc to be measured.

morning and late in the evening.

This point, labeled Isc, is the maximum current output that can

no resistance or a short circuit. The example to the left displays

a current of approximately 2.65 amps. The power output at Isc is

zero watts. When first purchasing a module, it is recommended to

sheet. The short circuit current can be measured only when making

a direct short across the positive and negative terminals of a module.

module with voltage greater than 24 V nominal) is not recommended

and can be extremely dangerous. All Isc measurements should be

taken when the module is not connected to other components in

the system. Note: When testing modules with ‘quickconnects’ it is

recommended to use test leads to avoid leaving carbon deposits

(which cause high resistance) on the module’s leads. Before testing

amperage with a digital multi-meter, check to ensure the module’s

create a specification label for each module. All modules are rated

under standard test conditions, thereby allowing their values to be

compared. The specification label can be found on the back side of the

module or through the manufacturer. 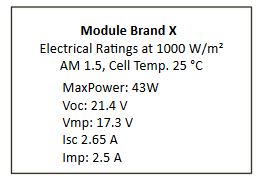