Series and Parallel Circuits with Solar Panels Photovoltaic modules and batteries are a system's building blocks. While each module or battery has a rated voltage or amperage, they can also be wired together to obtain a desired system voltage. 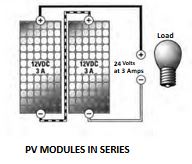 Photovoltaic modules and batteries are a system's building blocks. While each module or

battery has a rated voltage or amperage, they can also be wired together to obtain a desired

end of another module. When loads or power sources are connected in series, the voltage

increases. Series wiring does not increase the amperage produced. The image at right shows

two modules wired in series resulting in 24 V and 3 A.

only could power alone.

When four 1.5 VDC batteries are connected in series, what is the resulting voltage?

negative to negative terminals between modules. When loads or sources are wired in

parallel, currents are additive and voltage is equal through all parts of the circuit. To increase

the amperage of a system, the voltage sources must be wired in parallel. The image at right

shows PV modules wired in parallel to get a 12 V, 6-amp system. Notice that parallel wiring

increases the current produced and does not increase voltage.

Batteries are also often connected in parallel to increase the total amp-hours, which increases

the storage capacity and prolongs the operating time.

Systems may use a mix of series and parallel wiring to obtain required voltages and amperages.

of two modules are wired in series, increasing the voltage to 24 V. Each of these strings is

wired in parallel to the circuit, increasing the amperage to 6 amps. The result is a 6-amp, 24

4. Batteries in Series and Parallel

discharge. To make the flashlight last twice as long, battery storage would have to be doubled.

new string of batteries is wired in parallel, which increases the available amp-hours, thereby adding additional storage capacity and

increasing the usage time. The second string could not be added in series because the total voltage would be 12 volts, which is

not compatible with the 6-volt lamp.

So far, we have only discussed input voltages up to 24 V nominal. Today, most battery less grid-tied inverters on

the market require a high voltage DC input. This input window is generally in the range of 350 to 550 VDC. Because of the inverter's

high voltage input requirements, PV modules must be wired together in series in order to sufficiently increase the voltage. High

the battery bank. The advantage of using MPPT charge controllers is clear in the size of the wiring required between the array and

charge controller and in the number of parallel strings required. We have a chart which makes it easy to see the total array size

depending on battery voltage and the maximum open circuit voltage input for each charge controller. 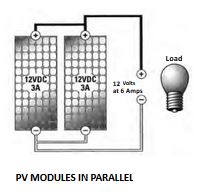 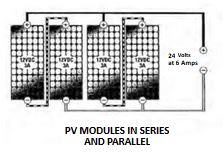