I was very pleased with the professional guidance provided on the phone for selecting the correct product in addition to good advice on my over all goals. Once ordered, my items arrived quickly and in good condition. I will certainly be back for future purchases. 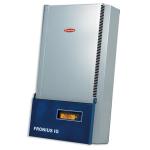 The inverter is the heart of all but the smallest power systems. It is an electronic device that converts direct current DC power from batteries or solar modules into alternating current AC power to operate lights, appliances or anything that normally operates on power supplied by the utility grid. Inverters come in many varieties, sizes and qualities and offer various features that specialize them for particular applications.

Off-grid, or standalone, inverters convert DC power stored in batteries to AC power that can be used as needed. Select an inverter for your power system based on the maximum load you will be powering, the maximum surge required, AC output voltage required, input battery voltage and optional features needed. A summary of the different inverters available is shown below.

Grid-tie, or utility intertie, inverters convert DC power from PV modules into AC power to be fed into the utility grid. There are two major types of grid-tie inverters; string inverters and low voltage input or Micro inverters.

Using a dual-function inverter allows you to sell excess power to the utility, and also maintain a battery bank for standby power in the event of a utility power failure. The Xantrex XW series, and the OutBack GFX series inverters are primarily standalone inverters that can function as an intertie inverter at the same time, but with a lower efficiency than an inverter designed for grid-tie only.

Off grid inverters can only be used on battery based systems independant of the utility grid.